Taking things into their own hands

Challenge finds out how three public officer makers take the initiative to come up with solutions to real-world needs, while inspiring budding makers along the way.  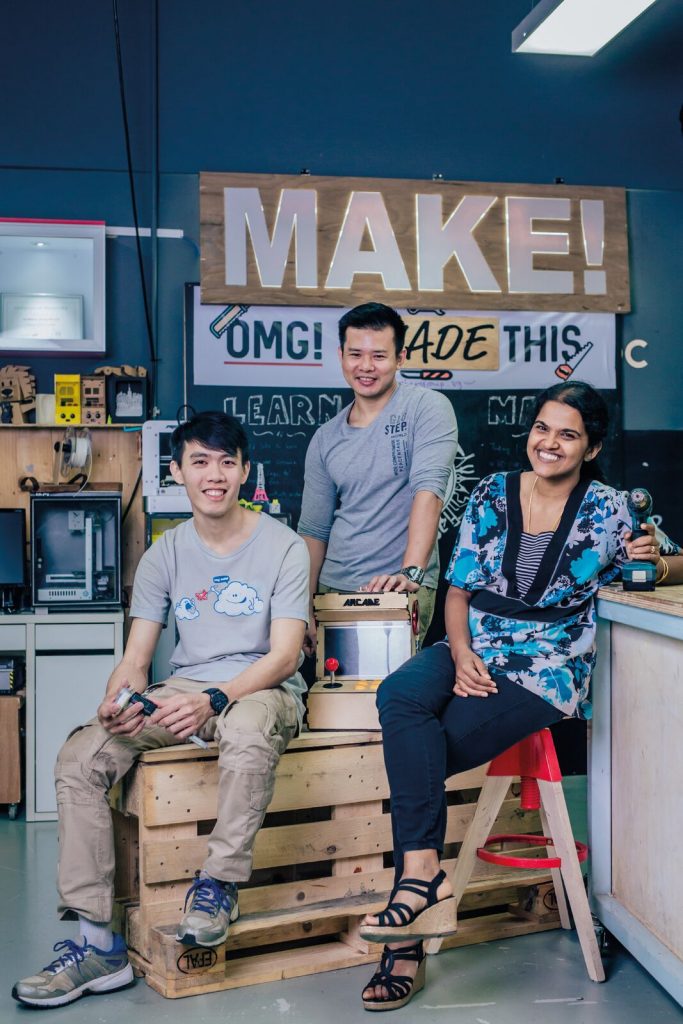 He is heartened that students, especially, have expressed interest in creating their own machines after listening to him 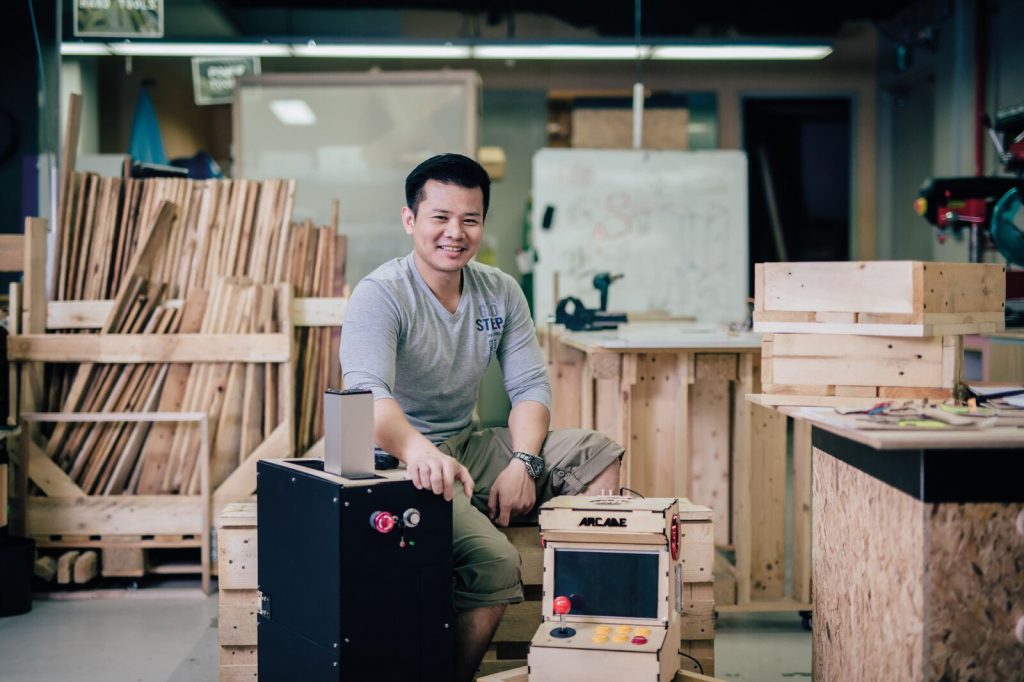 Mr Teng fabricated an arcade machine using recycled parts (the screen and joystick) and a Raspberry Pi circuit board.When Mr Teng Kee Wee visited an international technology and manufacturing fair in China two years ago, he was curious to see which outstanding manufacturers were representing Singapore. “To my horror, I only saw shopping mall management for Singapore,” he recalls. The absence of Singapore-made technology at the fair struck Mr Teng, who is an engineer by training, as a sign that local engineering was in a state of decline.

He decided to “do something about it” – by being a maker. “To change this, I need to inspire the young generation of Singaporeans to pick up engineering,” he explains. “The best way to do it is to lead by example.”

Learning new skills from the Internet, Mr Teng built a 3-D printer in six months using simple tools in his four-room flat. He went on to create various versions of digital fabrication machines, each bigger and better than the last. In trying new ways to challenge himself, he invented a 4-in-1 digital fabrication device, which he claims is unique in the market. Mr Teng’s device combines key manufacturing capabilities: 3-D printing, laser cutting, vacuum forming and computer-aided milling. His tinkering is done in his free time when he’s not working at the Ministry of Defence’s Future System Technology Directorate. Mr Teng is a good example of how limitations – a lack of space at home, having to juggle the demands of a day job, and starting with no resources or experience – can be overcome if we want to make and invent things. That is a message he shares at events such as Maker Faire Singapore, where he displays his creations and explains how he overcame challenges in the making process. He is heartened that students, especially, have expressed interest in creating their own machines after listening to him.

Like Mr Teng, Dr Kiruthika Ramanathan from the Science Centre Singapore keeps her eyes peeled for opportunities to make a difference in the wider community.

At work, the senior manager of Education Services seeks to spread the “maker mindset” – a can-do attitude that treats problems as solvable regardless of the tools and resources available. Dr Kiruthika does so by organising outreach efforts such as Maker Faire Singapore and conducting workshops and learning opportunities for children and educators. She believes that the process of making leads to learning that sticks, as it involves failing and trying different ways to solve a problem. And her passion for making extends beyond the workplace. Noticing that many in the community are interested in making but do not know where to start or what to do, Dr Kiruthika roped in her two daughters, age seven and nine, to plan and facilitate community making sessions. They invited children and their families to tinker with materials such as cardboard and electronics at “Come and Make” sessions, held at a void deck in Bukit Batok over 10 Sundays in 2016. Some children started off unsure about what to do, but gained con dence through the sessions, observes Dr Kiruthika. More than 100 children (some as young as three) learned to create toys out of dismantled computer keyboards, among other activities.

“We want to help them get over the mental hurdle and get started,” says Dr 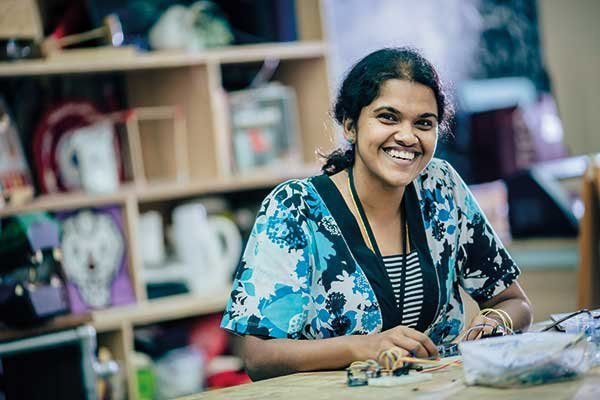 Kiruthika believes there is much to learn from failure.

For English teacher Mr Clement Low, realising that some of his students could not afford computers led him to try building low-cost computers with modified microcomputers such as the Raspberry Pi. That idea is still on the drawing board, but he hopes to build a viable prototype and work with sponsors to realise this project in the future.

The 29-year-old, who teaches at Marsiling Secondary School, is also a 3-D printing enthusiast. He is always on the lookout for tools he can make to solve problems and do things better. Three years ago, he created a 3-D printer at home, and used it to print parts to repair his Nerf blaster toy, instead of buying a brand new one.

For air rifle, a sport that he participates in competitively, Mr Low has used 3-D printing to customise accessories such as a sight raiser and butt-plate extender. Both components enable adjustments to allow taller shooters to adopt a more stable shooting stance. He is now working on customising grips for the rifles.

Ask for help and keep trying

While Mr Low has had projects fail and been frustrated when issues crop up and stall his progress, what keeps him going is viewing obstacles as solvable.“It’s about perseverance… If you just don’t give up, keep at it and discuss with people, you can nd different ways to make it.” One tip, says Mr Low, is to talk through issues with friends, especially other makers who might have skills or tools that could help. He remembers learning sewing from another maker, borrowing tools and tapping other makers for ideas. Another way to cope with failure is to accept it as part of the learning process, says Dr Kiruthika. “When you make, the learning is happening not because somebody tells you the answer, but because you learn from failing,” she says. 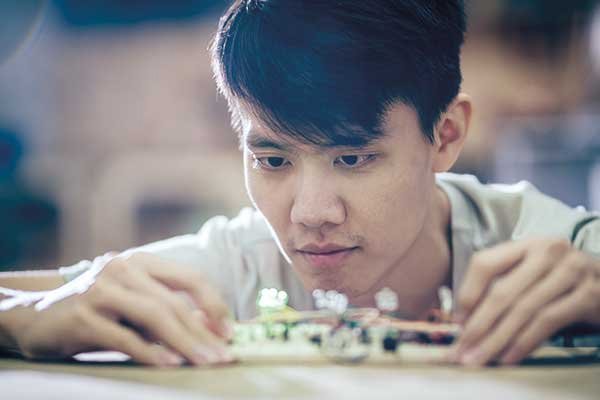 Mr Low made a lightboard inspired by game shows to make quizzes more fun for students.

The spirit of trying and the resilience that develops from the make-fail-learn cycle is the main reason why Dr Kiruthika advocates for children to start making from a young age. Her daughters grew up making their own toys and playing with toys that were made for them. When they wanted to learn pottery, they crafted an electric pottery wheel from an old bicycle wheel, a fan and wood. “I don’t want them to take the easy way out because in life nothing is easy,” says Dr Kiruthika. “You get that grit when you make something because there’s a high chance it’s not going to work for the first time. You have to work on it.”

 It’s about perseverance… If you just don’t give up, keep at it and discuss with people, you can nd different ways to make it.

For Mr Teng, whenever he encounters setbacks or feels like giving up, he motivates himself by focusing on his aim to create things that contribute to the community. Constantly looking to improve his designs to solve real-life problems, Mr Teng modified his digital cutting machine to be more portable, so that he could take it to a village in Thailand to help the locals create wooden or leather handicrafts more efficiently. Beyond benefiting the villagers, he hopes the project will yield more tips and lessons that he can then share with other Singaporeans, and inspire them to pick up making.

“I built all these machines in my HDB room, without special tools or previous experience. They can do it too,” he says.